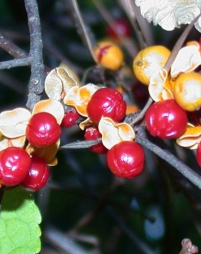 The state of Vermont has a rule that regulates the importation, movement, sale, pocession, cultivation and/or distribution of certain plants known to adversely impact the economy, environment, or human or animal health.

"Noxious Weed" means any plant in any stage of development, including all current and subsequent subspecies, varieties, and cultivars, and parasitic plants whose presence, whether direct or indirect, is detrimental to the environment, crops or other desirable plants, livestock, land, or other property, or is injurious to the public health or the economy generally.

"Class A Noxious Weed" means any noxious weed that is not native to the State, not currently known to occur in the State on the date of listing, and poses a serious threat to the State.

"Class B Noxious Weed" means any noxious weed that is not native to the state, is of limited distribution statewide, and poses a serious threat to the State, or any other designated noxious weed being managed to reduce its occurrence and impact in the State, including those on the Federal Noxious Weed List (7 C.F.R. 360.200).

The rule became effective in March of 2012. Individuals with concerns or questions not answered in the FAQ's are encouraged to contact the Plant Health Team.