Mosquitoes are an everyday presence in most people's lives. While a large portion of mosquitoes are just a nuisance, some are capable of carrying diseases (called vectors) and it is important to protect ourselves from mosquitoes bites.

Vermont has 45 different species of mosquitoes, all with varying habitat and host preferences. Mosquitoes require water as three of the four life stages are aquatic. Some species prefer to lay eggs in permanent bodies of water, like along the edges of ponds and lakes, while others prefer temporary bodies of water, like pools in forests, fields that flood with large rain events, or even small containers in your yard that fill with rainwater. See what habitats different Vermont mosquito species prefer.

Depending on the species of mosquito, females either lay their eggs singly on the water surface, in a “raft” of hundreds of eggs on the water’s surface, or singly on soil above water that will eventually flood. 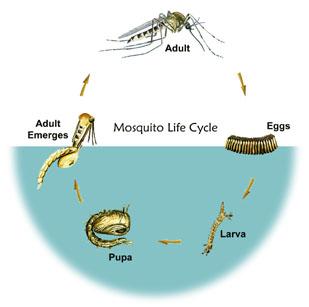 The length of a mosquito’s life can vary greatly. Variables such as temperature and other environmental conditions, as well as the species of the mosquito, impact how long each stage lasts.

Both male and female mosquitoes feed on nectar, but only female mosquitoes bite, as they require the protein in blood to create eggs. While it may seem that all mosquitoes like to feed on people, many species prefer other animals and rarely bite humans. Culiseta melanura and Culex pipiens prefer birds as their host and Culex territans prefers frogs. There are many mosquito species that feed on mammals and some are aggressive human biters. See each species' host preference.