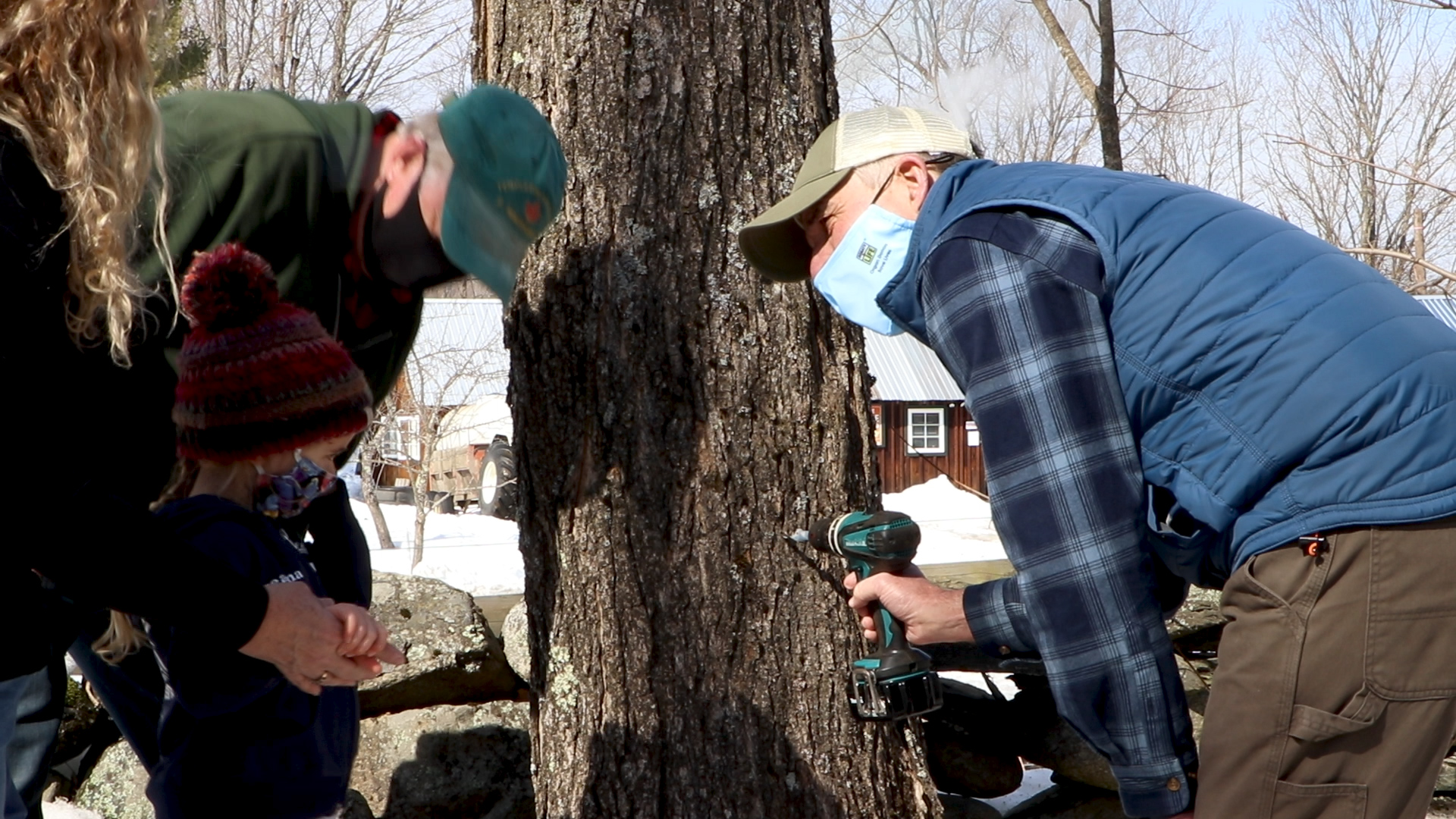 March 11, 2021 | Montpelier, VT – Vermont Governor Phil Scott joined the owners of Templeton Farm in East Montpelier today, to recognize and celebrate Vermont’s maple industry.  The annual first tree-tapping recognizes the start of the maple season with a ceremonial tree tap by the Governor, while also recognizing the cultural and economic importance of the tradition and agricultural crop.

“Our maple industry leads the nation, supports our economy and strengthens the Vermont brand,” said Governor Scott. “We wouldn’t have the best maple in the world if it wasn’t for families like the Chapells here at Templeton Farm, and the many hard working families and sugar makers who make us proud.”

The Tempelton Farm in East Montpelier has operated a maple syrup business since 1810.  Eight generations of the Chapell Family have run a variety of agriculture businesses including maple and beef. Bruce Chapell and sons Ryan and Seth Chapell currently operate the family business.

“Vermont is the leading maple syrup producer in the nation, with nearly half of the country’s maple production coming from our state’s family farms like the Chapell’s,” Agriculture Secretary Anson Tebbetts said.  “In 2020, nearly 2 million gallons were produced with $54 million in sales, making maple the second largest agricultural crop in Vermont behind milk and highlighting the importance of this industry to our state.”

While traditional maple syrup production and practices continue on the state’s working landscape, the Vermont Agency of Agriculture, Food and Markets is supporting the industry as they look to the future.  According to the Vermont Maple Sugar Makers Association, maple syrup is evolving into an important culinary ingredient.

“Vermont Maple is much more than a pancake topper these days. We are seeing it infused in barbeque sauces, hot sauces, spirits and beers, and is even considered a healthy alternative to cane sugar as a natural sweetener,” said Allison Hope, Executive Director of the Vermont Maple Sugar Makers Association.  “Our state’s sugar makers have answered the call with increased maple trees in production, having more than doubled the number of taps since 2008.”

While it’s been a slow start to the season with cold temperatures, this week’s warmer weather should trigger strong sap runs.  Vermont sugar makers are ready to capture this “liquid gold” and deliver it to the masses as pure Vermont Maple Syrup.  With the ongoing COVID-19 pandemic, the annual Maple Open House Weekend and other annual traditional maple activities are not happening as usual, but you can visit the Vermont Sugar Makers Association to find a maple producer near you.

To find out more about how Vermont State government is supporting the state’s maple industry, visit: