An Introduction to Snow Fleas

When you are out checking on your sugar tubing or shoveling the recent foot of snow off your deck, look around and see if any tiny but prolific snow fleas are frolicking in the snow with you. Snow fleas, known as springtails, are not fleas, and are no longer considered insects, but they are a remarkable group of creatures with some unusual features.

Snow fleas have a structure called a furcula, which sounds like a Swiss cable car, and has a tail-like body part that is held under the abdomen and when released, propels the snow flea upwards, outwards, and away from potential enemies. Using the furcula takes a lot of energy, so some types of snow fleas have found better ways to avoid predators, such as by living under bark. And some types no longer have furculas.

In addition to the flinging furcula, snow fleas have sticky tubes called collophores. These tubes are thought to play a role in water intake and help the snow fleas adhere to surfaces. Recent flash freeze photography revealed that along with those functions these tubes possibly provide direction for the snow flea spring. Another interesting anatomical note is that they poop when they molt as they shed the lining of their guts and start the next life stage with fresh empty innards.

Springtails were formerly in an insect order called Collembola. They are now re-organized into a group that is closely related to insects but more like crabs and lobsters. Although they have 6 legs, they are still considered to be hexapods. Scientists are still fidgeting around about where exactly to place this group, a discussion which will probably not keep most people up nights. 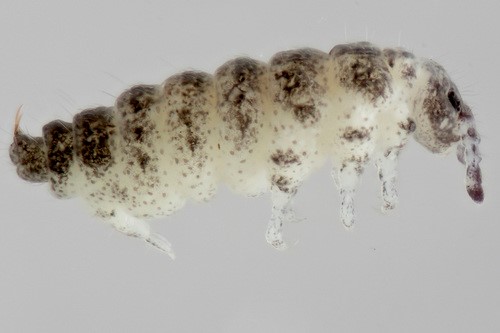 Identifiable remnants of Collembola were found in a 410-million-year-old rock, so they have been around for a while. It is thought that they were one of the first arthropods (jointed leg organisms) to move from the water to the land. They do end up in unusual places: a new species was discovered in a 6,500-foot-deep cave and was coaxed out using cheese as a lure. Another species can be found on Mt. Everest. They are right at home on the snow because they have a protein that acts as an anti-freeze and keeps their cells from freezing.

Snow flea diets are as diverse as their habitats. They eat leaf litter, live plant material, algae, fungi, other microorganisms like protozoans and nematodes. In the food chain they are both predators and prey. They don’t bite, and they play a big role in the ecosystem as detritivores (breaking down detritus like leaf litter). Even though they are small, they show up in large numbers. Next time you see specks of dirt moving in the snow, give them a friendly wave and maybe they’ll flip for you.