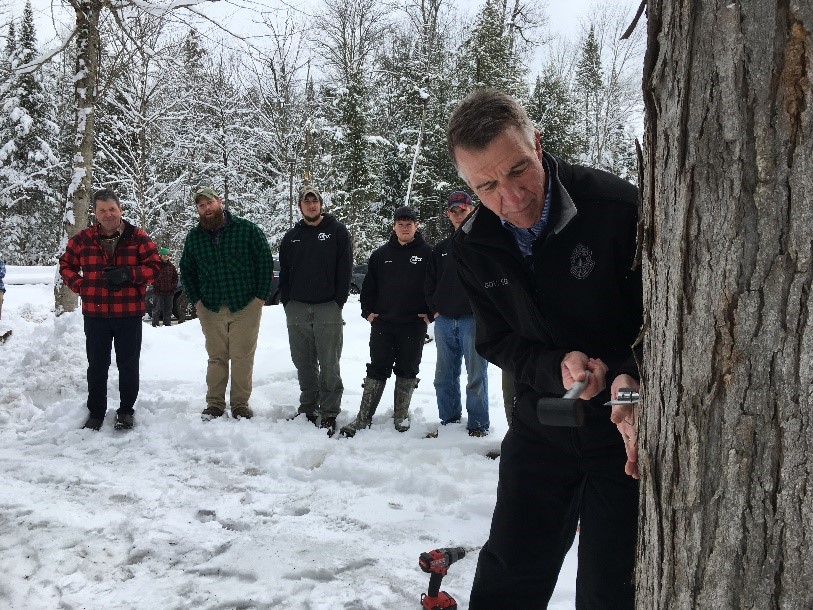 March 6, 2019 / Montpelier VT – Governor Phil Scott will welcome USDA Secretary Sonny Perdue to Vermont for the first time on Friday to help celebrate the official kickoff of Vermont’s sweetest season.  They will each tap a maple tree to recognize this important industry to Vermont’s economy and culture, and as an important contributor to the country’s working lands products.  This year’s tapping will take place at Georgia Mountain Maples in Milton, Vermont.  The maple operation produces maple syrup from 160,000 taps.

Students from Milton Elementary School will celebrate the at the Tapping event with Georgia Mountain Maple Syrup with pancakes and sugar-on-snow.  A press availability will occur from 11:45 to 12:15 for those wishing to speak with attending officials.  A tour of the facility will commence thereafter, led by the Harrison Family, the owners of Georgia Mountain Maples.

In 2018, Vermont once again Vermont led the nation in making maple syrup, producing nearly 2 million gallons of the sweet product. This means about half of the maple syrup produced in the United States is made in the Green Mountains.

Please join us for this important recognition of our Vermont maple industry.

* Photos are from the 2018 First-Tapping event at Hazen’s Sugarhouse in Hardwick, VT.