Gypsy Moths Are Making A Comeback in Vermont. Why? 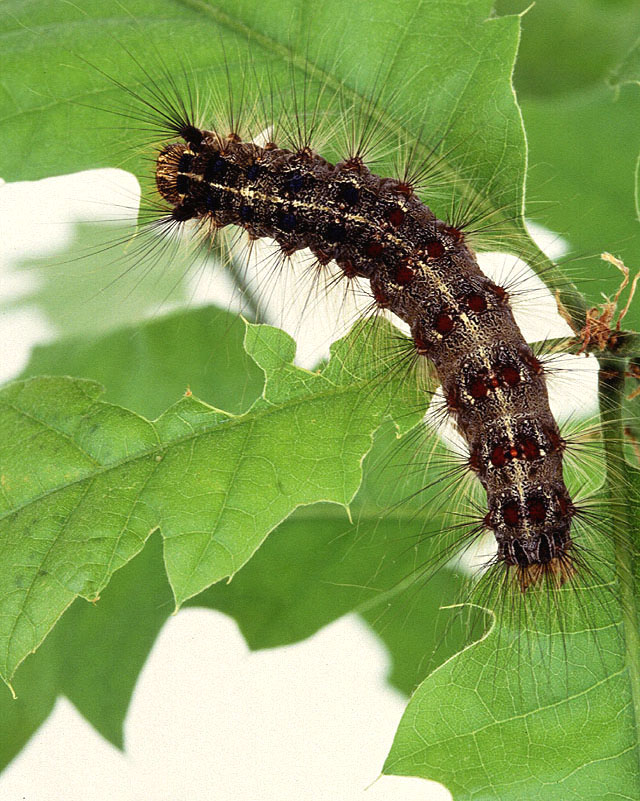 June 7, 2021 | Montpelier, VT - Many people in Vermont are encountering gypsy moths (GM) for the first time. This invasive species arrived in the United States over 100 years ago and has been expanding its range ever since. They can be significant defoliators (leaf eaters) of trees and shrubs. They prefer oak trees, but when there are a lot of caterpillars around they will eat any type of leaf, including maple and pine.

Vermont has not seen an outbreak of GM since 1991. At that time a fungus called Entomophaga maimaiga became prevalent in the area and significantly decreased the GM population. But the dry weather that we’ve experienced over the last few years has not been good for fungi, and the absence of fungi has allowed the GM numbers to increase.

Trees can survive a year or so of defoliation, but defoliation and dry weather are stressors on tree, shrub and plant health. Keeping your plants watered will help offset defoliation stress. We may see another year or two of high levels of GM unless we get some rainy seasons, which should increase the GM killing fungi.

There are traps for caterpillars and for adult gypsy moths. See below for more information on caterpillar control.

•             If you have a few trees, caterpillars can be squished, or pruned out of the trees and submerged in soapy water. The egg masses can also be scraped and submerged or squished until you hear a “popping” sound.

•             Installing a band of burlap around the trunk of the tree this year will encourage egg masses to be laid on the burlap this fall. After the eggs are laid, you can remove the burlap and destroy the egg masses. This can help reduce populations next year.

•             Sticky bands can also be installed this year on the trunk and/or lower branches of high-value trees. When caterpillars crawl up the trunk, they will get stuck and die. If you use this method, a piece of chicken wire or plastic covering should also be used to prevent wildlife such as birds or small mammals from getting stuck on the bands.

•             The most commonly recommended pesticide treatments contain the bacteria, Bacillus thuringiensis kurstaki (Btk). Btk is applied to foliage where gypsy moth larvae will consume it and are then killed. This strain of bacteria is specific to moth larvae, and its toxic properties get activated when it interacts with particular enzymes in the caterpillar’s digestive tract.

Here are a few additional caterpillar control resources that you may find helpful: